What good is data if you can't see it?  We sat down with an experienced PI System product manager who helps put data in perspective. As a product manager, he is responsible for knowing the ins and outs of PI System. With almost a decade of experience, he has seen PI System evolve into a leading solution for data visualization and digital transformation.

What is AVEVA PI Vision?

AVEVA™ PI System™ users needed a way to view their operations data in a simple, agile way. Having raw data is valuable, but by transforming that raw data into a visual format, it quickly becomes consumable information, leading to better data-driven decisions for the organization.

AVEVA PI Vision benefits many users across the organization:

What are some of the key features? 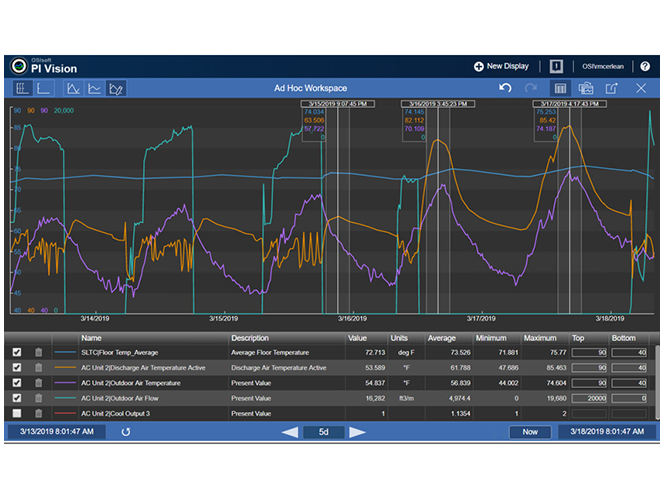 The first major feature of AVEVA PI Vision is Ad Hoc Trending. This allows users to quickly and easily begin root cause analysis by multi-selecting data items from any display and then sending them to an ad hoc workspace where those items will then be trended together with one click. This creates a seamless problem-solving workflow, as users can easily create, save, and share these ad hoc workspaces.

The second key feature of AVEVA PI Vision is Collections, which is a grouping of similar assets. This allows users to easily filter their displays to only show items that are relevant (such as only displaying assets that need troubleshooting). Another benefit of Collections is that if you install new assets, Collections automatically adds them to the relevant PI Vision display, so there is no need to edit or rebuild displays.

Lastly, Multi-Stating is another key feature of AVEVA PI Vision. This feature provides visual status indicators for the operator or engineer, making it easier for them to understand the status of their assets, at a glance. For example, a symbol on a display will begin blinking red when the value of that symbol has exceeded a predefined threshold, in order to draw the operator’s attention to a potential problem. When the value of the symbol is within the predefined threshold, the symbol can revert back to its original color, notifying the user that there is no longer an issue.

One of the most common uses is to build out process monitoring displays, allowing operators to visualize what is happening with the assets at a given site. AVEVA PI Vision is also extremely useful for conducting root cause analysis and visualizing trends. Users can then share displays across their team and/or other business groups, since it's a web-based client that allows for quick information transfer.

General Atomics Aeronautical Systems, a leading manufacturer of remotely piloted aircraft systems and radars, is using AVEVA PI Vision to monitor the conditions of paint booths for drones in real-time. Abbott Nutrition is improving process controls and increasing batch cycle times through better data visualization. Bondtech, a manufacturer of autoclaves, core lechers, and vulcanizers, is providing customers with web-based PI Vision dashboards for monitoring and system alerts. Sempra Renewables is using PI Vision to give operators rapid insights into each of their sites, with alarms tied directly into the screens for rapid issue detection.

AVEVA has released a migration utility that provides a path forward for existing PI ProcessBook customers.

What’s next for AVEVA PI Vision?

Some additional improvements that have been considered based on user feedback include:

Stay in the know: Keep up to date on the latest happenings around the industry