In 2016, with the goal of significantly reducing residential CO2 emissions, the Dutch government announced its Energy Agenda, which aims to disconnect all residential energy users from natural gas in favor of renewables by 2050. That's a big statement coming from a country that has traditionally been so reliant on natural gas. So, how will the Netherlands heat its homes?

While much of a home's heat loss can be reduced with improved insulation and construction, the proposed heat sources, whether using shared district heat supplies or with traditional electric heat pumps, will require increased electricity consumption – the CO2 tradeoff coming from an increasing supply of carbon-neutral green power generation.

As a regional grid operator delivering energy to more than two million customers in the Netherlands's most densely populated and industrialized area, Stedin aims to provide “sustainable energy for everyone” through a future-proof delivery network. The network will continue to power three of the four largest cities in the western Netherlands during the shift away from natural gas.

To efficiently offer power to over four million customers, Stedin's top priority is to manage asset performance and ensure that it can optimize performance and prevent outages in the midst of increased demand. For needed real-time insights, Stedin turned to its existing AVEVA PI System as well as an AVEVA PI System Connector for IEC 61850.

Within Stedin's 185 substations, some of the assets have been in operation for over 40 years. Asset and substation data was primarily collected using a combination of its SCADA system and handwritten notes. However, Stedin's processes did not give the team the visibility needed to implement predictive maintenance strategies and optimize performance. “You're only as good as the information you're getting from your SCADA historian,” said Anne van der Molen, Grid Strategist at Stedin, during the 2017 EMEA Users Conference in London hosted by OSIsoft, now part of AVEVA. “If you want to change that, you need to change the interface from the substations or the equipment in the field to your SCADA.”

To gather the data needed for operating its aging network with maximum efficiency, Stedin began implementing the International Electrotechnical Commission's (IEC) 61850 standard communication protocol for intelligent electronic devices (IED) within its substations. This new protocol allows data engineers to collect and warehouse performance data and functional event history far beyond what could otherwise be gathered from its existing SCADA environment.

With several of its substations already 61850 compliant and more on the way, Stedin needed a way to harness that inbound data and visualize real-time asset performance. Connecting its existing AVEVA PI System to the 61850 devices was the answer. 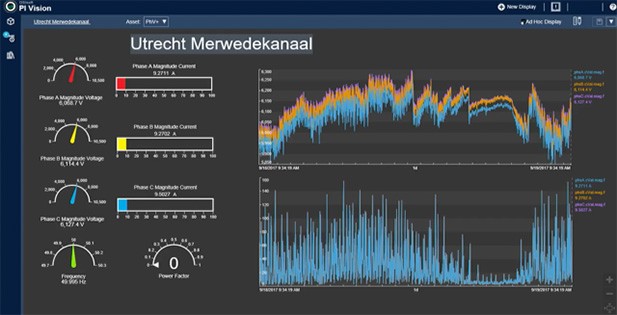 Train station acceleration: Stedin immediately noticed peaks in energy usage, which were attributed to nearby trains accelerating away from the train station.

“Getting a data point into SCADA means actually updating the substation automation,” explained Alexander Meeuwisse, Stedin Solution Architect. “This is a bunch of new information for us because we had the SCADA data and the historian, but we could not visualize it. Now we can. The SCADA system didn't have the resolution we have now to actually see this,” he explained.

Overall, the results from the AVEVA PI System 61850 connector were realized sooner than expected. The team learned that tap changers were switching 30 times per day, far exceeding the optimal 16, thus wearing out equipment faster than necessary. In addition, they were able to attribute peaks in energy usage due to trains accelerating away from a local station.

With the abundance of new real-time insights from AVEVA PI System, Stedin can now implement predictive maintenance strategies to ensure that substation assets are running at optimal performance and getting the maintenance needed at exactly the right time.

As the Dutch move closer than ever towards renewables, Stedin's customers will increasingly rely on the company to deliver the power they need. Thanks to AVEVA PI System, those customers can rest assured that Stedin can deliver consistent, cost-effective, and reliable power whenever they need it most.

You can read more about how Stedin is using AVEVA PI System and the PI 61850 Connector here or watch the full presentation.