Why do we need Energy Storage, and how can we get it?

Please enjoy the informative blog below. For more blogs, success stories, and webinars on power generation and sustainability, please visit our website

There is a move to renewable energy generation worldwide. Words like decarbonization, carbon footprint, circular economy and sustainability are ubiquitous whenever one reads an annual report, hears a CEO of any company or the head of a government. Countries, cities, organizations and even energy companies continuously pledge to be carbon-free or at least carbon neutral by a certain date, usually sometime between the years 2030 and 2050.

How far are we from these carbon-free or carbon neutrality goals?

Looking at numbers from 2019, we find that renewable energy accounted for 27% of the power generation mix, with hydropower making up almost two-thirds of the renewable portion. Generation from nuclear power accounted for 11% of the mix. This means than 62% of the power generated worldwide originated from burning carbon-containing fuels such natural gas, coal and petroleum.

While several forms of renewable generation are expected to play a role in the decarbonization process, wind and solar energy will continue to capture the most shares in the generation and capacity mix due to continuing cost reductions and technological improvements. However, wind and solar generation still need to solve a major challenge, and that is dispatchability. While sun and wind are available everywhere, they are not available on demand. They need some sort of energy storage to be dispatchable. Therefore, energy storage is considered the holy grail needed to achieve maximum renewable energy penetration and decarbonization.

What are some forms of energy storage presently used or under development?

Pumped Hydro: Also referred to as pumped-storage hydroelectricity (PSH) or pumped hydroelectric energy storage (PHES). Accounting for 90% of energy storage capacity worldwide, this method uses excess or low-cost energy to pump water to a higher reservoir for later use. The stored water is released through a turbine-generator to produce electricity when needed. Pumping water to the upper reservoir introduces energy losses in the system, making the overall process a net consumer of energy. However, economic benefits are obtained by dispatching the electricity during high-demand periods when prices are the highest. The use of excess wind or solar energy to transport the water to the upper reservoir further improves the economic benefits to the plant.

Cons: Pumped hydro requires a lot of land, and it is limited to certain geographies.

Lithium-Ion Batteries (LIB): This technology is straight-forward and has been available since the 1980s. It is the chemical equivalent of pumped hydro, but instead of potential energy due to a difference in reservoir elevation (potential energy), one deals with the flow of atoms between two energy reservoirs. This is the technology behind EV and cell phone batteries, as well as the TESLA Power Wall.

The chemical battery space has been dominated by the lithium-Ion technology since 2010 particularly because the economy of scale has lowered its cost by about 80%. These batteries are presently cost competitive for transportation use. However, for the electric grid use, the cost needs to drop by 10 to 20 times from present values. Further economy of scale cost reductions are still possible, but the price of lithium and other components create the bottom floor for LIB costs.

CAES is a method to store energy by compressing air for use at later date. During period of low electricity demand, renewable energy compresses air and stores it in an underground aquifer, salt or hard rock cavern. When electricity is needed, the stored high-pressure air generates electricity by expanding through an air turbine. Firing natural gas before the air enters the turbine increases the power output. When using renewable energy, this can be thought of as decoupling and lowering the cost of the air compression stage of a combined cycle gas turbine plant.

CAES is well suited for large-scale energy grid usage, while most energy storage systems work well for small-scale energy usages. Installation and implementation costs for CAES are relatively low due to the use of existing and natural reservoirs. Furthermore, CAES technology and equipment are already in use by utilities and operators.

Flow Batteries: A flow battery is a rechargeable fuel cell in which an electrolyte containing one or more dissolved electroactive elements flows through an electrochemical cell that reversibly converts chemical energy directly to electricity. California based Primus Power developed a 5-hour duration zinc bromine flow battery, called the EnergyPod, and Oregon based ESS has developed an Iron-Salt-Water flow battery than can deliver 100 kW for 4 hours to 33 kW for 12 hours. 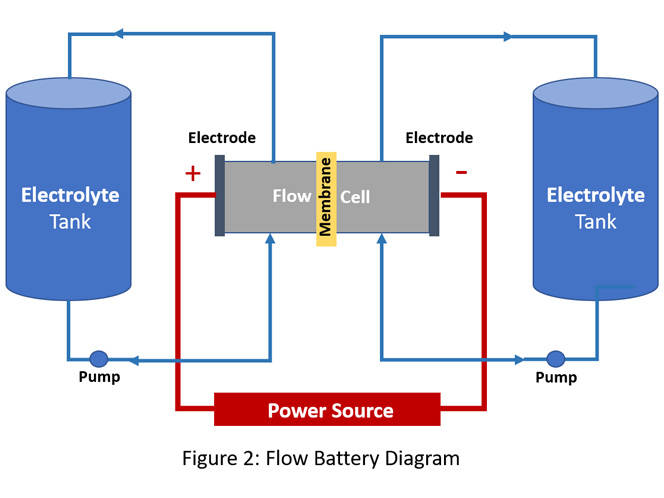 Gravity and Kinetic Energy: A Swiss start-up company, Energy Vault, utilizes the same fundamentals of physics and kinetic energy as pumped hydro but replaces the water with custom made composite blocks. A 400-foot-tall crane uses excess electricity from wind or solar to power electric motors that lift and stack concrete cylinders weighing 35 metric tons each. Later the crane lowers them back to the ground, generating electricity during the descent. The current cost of this energy storage system is around $150 per kWh.

The company claims its system has an overall efficiency of 85% versus 90% for a typical battery storage installation and has a useful life of at least 30 years with little to no degradation in performance over time. Energy Vault mixes cement with materials that cities often pay to get rid of, like gravel or building waste, to manufacture the blocks at one sixth the normal cost.

Cons: system is very large, making it impractical to install in urban areas.

Thermal Energy Storage (TES): Thermal energy storage allows to temporarily reserve energy produced in the form of heat or cold for use at a different time. For example, the excess energy generated from a solar farm during the day can be stored in the form of molten salt and used during the night to generate steam to drive a steam turbine. Conversely, excess wind energy at night can be used to produce ice, which can cool a building and lower demand for energy during the day.

An emerging technology in the TES field includes the thermophotovoltaic heat engines such as the one developed by California based Antora Energy. TPV heat engines are essentially a solar cell. However, instead of capturing sunlight and converting it to electricity, the TPV heat engine captures light radiated from the hot storage medium and converts it to electricity. The hot storage medium is made of ultra-cheap carbon blocks inside an insulated container.

Hydrogen Energy Storage (HES): Excess renewable electricity can be used to separate water into hydrogen and oxygen. Hydrogen can be safely stored in underground caverns and eventually re-electrified when needed. The stored hydrogen can produce electricity from a fuel cell or by flowing into a specially designed turbine.

Projects in the 100 MW range have been installed in the UAE, Australia and China. However, the largest project is being developed in Utah and aims to store enough hydrogen in salt caverns to produce up to 1,000 MW of electricity. The turbine technology developed by Mitsubishi allows a turbine to operate initially using a mixture of natural gas and hydrogen, and eventually 100% hydrogen.

We can see there are still many questions to answer and paths to be taken to arrive at an optimal solution to the energy storage challenge. However, we can say there is not a single silver bullet solution. More than likely, it will require a mixture of solutions tailored to applications, geography and business conditions.

AVEVA has a software solution for every need of the power industry. Please visit our website to learn how your industry peers use our digital solutions, from design and build, to operate and maintain.

Douglas Nunez is the Sr. Infrastructure and Utilities Marketing Manager at AVEVA. With over 20 years in the Power and Utility area, Douglas has a deep understanding of power market dynamics, including key issues, policies and trends affecting renewable energy development. He is an experienced performance consultant with a demonstrated history of working in the power generation industry. He is also skilled in process controls, process simulation and project management.