In 2019, Ryan Muir of the University of Cincinnati took first place in our Academic Program Competition, securing himself a $3000 cash prize and an internship with AVEVA. Later that year, he accepted a full-time role as a Models and Applications Engineer for AVEVA Process Simulation. We talk with Ryan about his journey so far, his advice to young students thinking about a career in STEM, and his recommendations for college students considering the competition.

“I knew absolutely nothing about AVEVA before it all started,” remarks Ryan, as he reflects on how he first heard about the company and competition. At the University of Cincinnati, it was his professor who first posted about the Academic Program Competition, introducing him to AVEVA Process Simulation. It was from here that he would start his journey from competition entrant, to winner, to full-time AVEVA employee.

Ryan’s initial interest in pursuing a STEM career started in high school after taking Advanced Placement chemistry and calculus courses. He was attracted to chemical engineering because of the wide variety of career opportunities after graduation. This led him to pursue a Bachelor of Science degree in chemical engineering at the University of Cincinnati. He also earned a Master of Engineering degree through a combined degree program offered at his university and, while enrolled, spent two years working in industry as a part of a cooperative education program. Through these programs, Ryan was developing a variety of skill sets and experiences in different STEM fields.

Tips for Entering into a STEM Career

Ryan’s advice for anyone contemplating a STEM career: “To be successful, you need to be passionate about the material. This will help you stay motivated when you reach roadblocks or find yourself in difficult classes.” He’s not afraid to say that it will be difficult either; he admits there were times during his classes and the competition when he was stuck and had no clue what to do. However, it was about reaching out to AVEVA technical support, his professors and others who could offer help - what’s imperative is to remain curious and to drive through the difficult moments.

For Ryan, most crucially, it’s about passion. It’s no good just to be in it - “you’ve got to be passionate about your work and really interested in making a difference somewhere.”

It was December 2018 when Ryan entered our Academic Program Competition. He would work through April 2019 building the simulation and preparing his report for submission. Before entering the competition, Ryan had “worked in other process simulators, but had never used AVEVA Process Simulation”. He spent the first month participating in a series of training sessions offered by AVEVA and learning more about the software. Soon, he started building some smaller simulations of his own, frequently “referencing the included example simulations and building [his] own using them as a guide”.

From here, he started building the simulation “a piece at a time”. Ryan says that “most nights, [he] would spend about half an hour after his classes working on the simulation and adding the next unit operation.” Once he had finished the steady-state design, he was then able to start thinking about moving it into dynamics and designing the control strategy. While this was more of “an advanced process”, Ryan notes how AVEVA Process Simulation simplified the transition from steady-state into dynamics - something that’s usually “pretty difficult to do with a lot of other software.”

These steps helped Ryan better understand “the train of thought that you would use in industry as you’re designing a process”: from building the base-case simulation to meet the specifications to finally designing a control scheme for the process.

Ryan is quick to highlight the guidance of AVEVA during the competition and stresses that there was support available to help overcome what at first seemed daunting and unknown. This is a barrier well understood by the team at AVEVA, who provides the training necessary to make the students comfortable going forward. Ryan offers that “even if you don’t know how to use AVEVA Process Simulation or if your university uses another software, don’t let that stop you from joining the competition.” He also stresses that the opportunity to learn another process simulator represents a significant advantage when preparing for full time interviews.

After winning the competition, Ryan was invited to apply for a position at AVEVA. He saw that “there was a real opportunity to do something creative with [his] chemical engineering background and help drive innovation in industry”. During his interview, he was provided with a greater insight into the culture of AVEVA and was confident that the environment would allow him to pursue this opportunity to its greatest potential. “I wasn’t expecting there to be bad people,” Ryan jokes, “but was really struck by how passionate everyone was about the software and how excited they were to welcome a new team member.”

The first week was a bit of a whirlwind with a quarterly planning meeting and team introductions, but Ryan soon settled in. Having worked in the chemical industry during his co-op programs in college, where projects often took many years, Ryan was surprised by how quickly things moved at AVEVA and all that could be achieved in a short space of time. Ryan currently works on the Models and Applications team which is responsible for building the process equipment models used in AVEVA Process Simulation.

The 2020-2021 AVEVA Academic Program Competition will kick-off at the 2020 Virtual AIChE Annual Student Conference in November. Details will also be available on the AVEVA website with links to the registration and steps to join. In closing, Ryan says that “when I think about originally joining the competition, I didn’t know what would come of it. At the minimum, I knew I would have a great opportunity to learn about AVEVA Process Simulation and interact with leaders in process simulation. I can now see how that single decision [to enter the competition] has had a profound impact on my career and my contributions to chemical industry.” 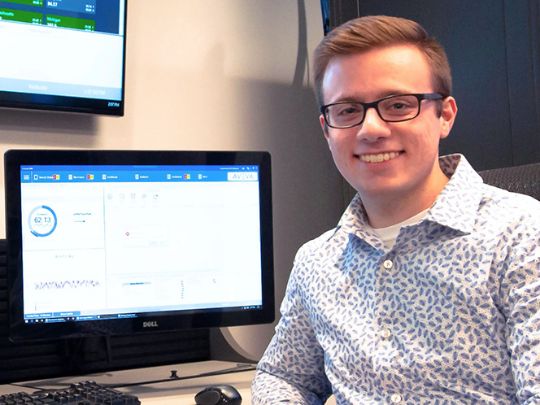 As a Models and Applications Engineer for AVEVA™ Process Simulation, Ryan is part of a team developing the future of process design and optimization. Ryan is responsible for the development and testing of computational equipment models to simulate both steady-state and dynamic chemical processes.